Insiders are buying, but is a Canadian lost decade ahead?

As we suggested in our INK subscriber Monday market comments, we expect market participants to be fixated on what Fed vice-chair Stanley Fischer says about inflation at a key speech to be given at the end of this week in Jackson Hole, Wyoming. For more than a year we have been writing about the Fed's failure to achieve its annual inflation rate objective of 2%. The Fed's chickens are coming home to roost as market participants are calling the institution out on its claim to be working towards that 2% aim. So why are insiders buying?
Although we have no great fondness of a 2% inflation objective, Fed officials have made their inflation target bed and it is now in a mess. The Fed's credibility on the matter took a major hit in June when it inadvertently published confidential staff analysis which concluded that the US economy was unlikely to reach the goal for the foreseeable future. Remarkably, despite the leak, Fed officials continued to push the notion of rate hikes this fall. As a result of this jawboning strategy, the Fed’s inflation goal is now even further out of reach by giving China and other countries such as Canada the ability to do pre-emptive strikes via currency devaluations. 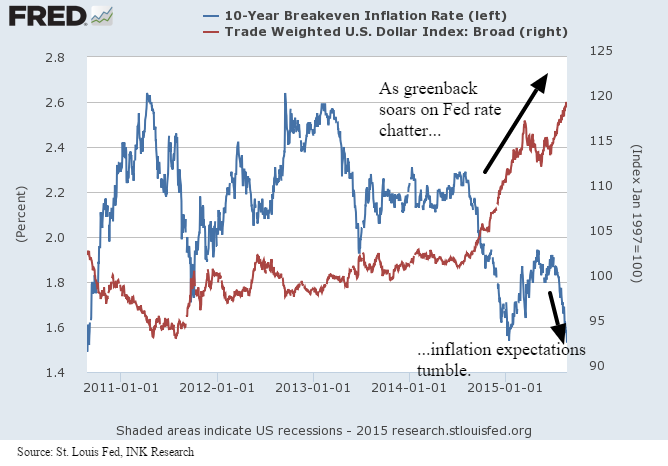 The Fed is no doubt aware of these concerns by now. Insiders seem to be betting that the Fed will at least provide some policy certainty so that investors can plan accordingly. That alone may help to stabilize stocks over the next year. One way or the other, the Fed is going to have to get off the fence and signal what is more important: getting to 2% inflation or deflating asset bubbles. How stocks respond will likely depend on the path that the Fed chooses. While Canada has rolled the dice by risking a real estate bubble (see oil patch for a post-bubble scenario), due to tightening financial conditions America faces a deflationary scare as seen in collapsing inflation expectations. Consequently, the Fed has no easy choices at this point based on its current thinking. For example, Minneapolis Fed President Narayana Kocherlakota has noted that raising rates risks diminishing the Fed's inflation targeting credibility. On the other hand, even the Fed knows that keeping rates at zero risks promoting more asset bubbles.

We see at least a 50% likelihood that the Fed will choose in favour of risking more bubbles. Indeed, in a speech last week, San Francisco Fed President John C. Williams made the case that it is too expensive to pop housing bubbles given the assumed negative impact on growth. If we are wrong and the Fed does move ahead with a rate hike this year, it will need to provide a new narrative as to why this is consistent with its inflation objective.

We suspect that growth is a big concern behind the closed doors at the Fed. Given the pullback in Canadian auto stocks which are heavily levered to the U.S. market, we find it hard to believe the current challenges facing the market are "all about China." Over the past month, Canadian auto-related stocks have experienced double digit falls, with Magna International (INK Edge outlook: mixed; MG) down 11.2%, Linamar (INK Edge outlook mixed; LNR) off 16.5%, and Martinrea International (INK Edge outlook: sunny; MRE) off 14.2%. Meanwhile, over the weekend the Wall Street Journal reported that 7 million Americans have failed to make a student loan payment in the past year. Not only is it unlikely that many in this group will be buying a new car or home anytime soon, but the story also undercuts the argument of a broad strengthening labor market as touted by U.S. economic bulls.

An alternative explanation for the fall in Canadian car stocks relates to the idea that there has been a general de-rating of all valuation levels due to rising risks associated with upcoming central bank policy decisions. If the current downdraft is more risk-related than growth related, the case for gold remains intact.
As mentioned in our report Monday, our Gold Indicator hit a multi-year high the day after the renminbi devaluation. The uncertainty that surrounds the next Fed move should help to support insider bets in this area at least until a clear path for US monetary policy is in view. The case for holding an allocation to gold and gold stocks is even stronger in Canada given the unpredictable path of monetary policy in this country under the Harper-appointed current Bank of Canada leadership.
REITs are another group we wrote about Monday that is flashing undervaluation. Indeed, during yesterday’s sell-off, we saw more buying by the CEO of Eastern Canada-focused Plaza REIT (INK Edge: Sunny: PLZ.UN). The REIT is one of the top 15 stocks in Canada with a market cap over $250 million as ranked by our INK Edge V.I.P. criteria (valuations, insider commitment and price momentum). Insiders are becoming a bit more defensive, favouring stocks that benefit from lower rates and have pricing power in Canada. This could change if the Fed makes it clear over the next few weeks that it has a plan to boost the American inflation rate.
For now, insiders are signalling a new era of Canadian stagflation ahead: low rates combined with above-average inflation. Let's hope this does not turn out to be a Canadian lost decade led by groceries stores and gold.
An expanded version of this article appeared earlier today on INKResearch.com
Tags:
Magna International (MG)
Linamar (LNR)
Martinrea International Inc. (MRE)
Plaza Retail REIT (PLZ.UN)
INK Gold Indicator
Category:
Canadian Insider