Thank you for joining us in a weekly technical look at the mid-cap oriented INK Canadian Insider (CIN) Index. Last week, the Index resumed its relentless uptrend and added 33.36 points to finish the week at 1238.51 for a gain of 2.8%. Over the last month, the INK CIN has generated a blistering run of 16.8% in gains. 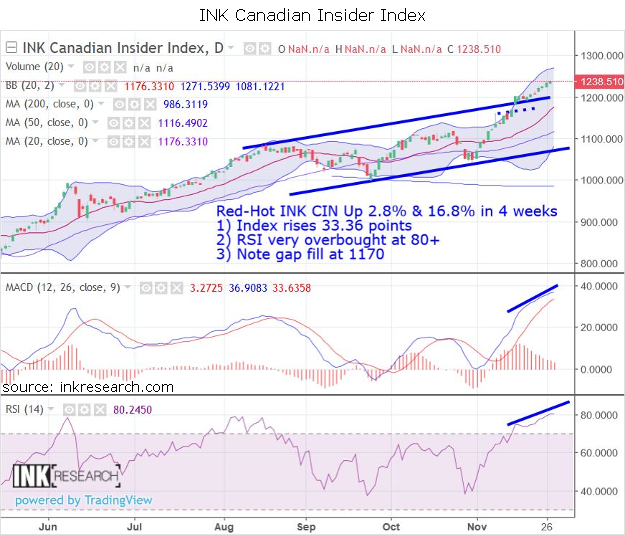 Our short-term momentum indicator, RSI, which was already in overbought territory, shot up another 5.43 points, or 7.2% higher, to 80.25.

Long-term momentum indicator MACD's histogram declined for the second week in a row, falling 4 points to 3.27. Movement in the histogram often precedes signal line crossovers in MACD which could foreshadow a price retreat, so we will be watching closely.

The INK CIN is now heavily overbought with its RSI at 80.25 and remains vulnerable to a correction, especially back to 1170 where we see a potential gap-fill. Of course, momentum can take on a life of its own during a furious price rally and price can rise further before that happens.