One of the most important decisions a government makes is the appointment of the CEO in charge of the cost of living, the governor of the Bank of Canada. The Harper conservatives abandoned the principles of sound monetary policy in the home stretch of the last mandate with the appointment of Stephen Poloz to that role on May 2, 2013. It was a decision that likely helped tip Canada into recession. Worryingly, the Bank of Canada and Harper conservative policy mix has also resulted in shifting the relative debt burden away from the Federal government's official balance sheet and dramatically onto Canadian families and CMHC.

Today I am venturing into the hazardous world of politics. I know that Canadian Insider readers hold a wide variety of political views, and I am sure I will manage to rankle a significant number. However, given that we are facing an election, now is the time to bring points of view to the table. My primary goal here is to raise matters of policy substance. For those who would like to add their voices to the debate, let’s have a discussion via our comments section.

Whenever someone makes a claim to be the best at something, as Stephen Harper has done in claiming to be the best manager of the economy, the assertion calls for scrutiny. It is particularly important to examine such claims with a healthy degree of skepticism when they are made in the realm of finance or economics.

With that in mind, let's start off with debt because we hear a lot from the Harper conservatives about how well they have done. In fact, the heavy lifting in terms of getting Federal government debt under control was done by Liberal Party of Canada governments. The central government debt to GDP ratio reversed course and rose under Stephen Harper who assumed power in February 2006. However, levels have now stabilized. 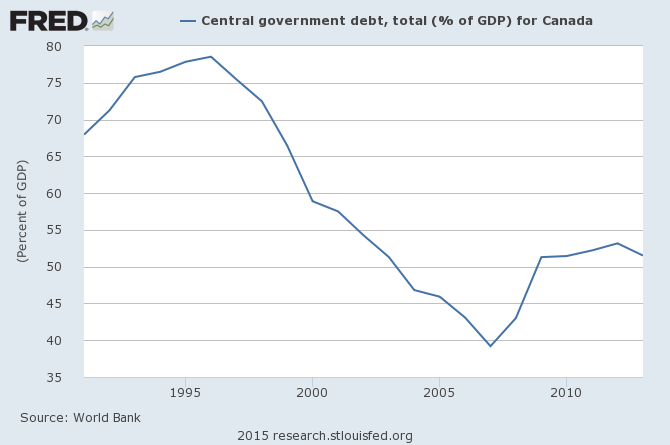 I recognize that early in the Harper conservative years there was the great financial crisis which was beyond their control. However, it is also true that, in the wake of that financial crisis, the Harper conservatives used taxpayers to backstop billions of dollars in CMHC guaranteed mortgage debt. That was a decision which remains effectively off the government's balance sheet.  We will not hear much about that on the campaign trail. 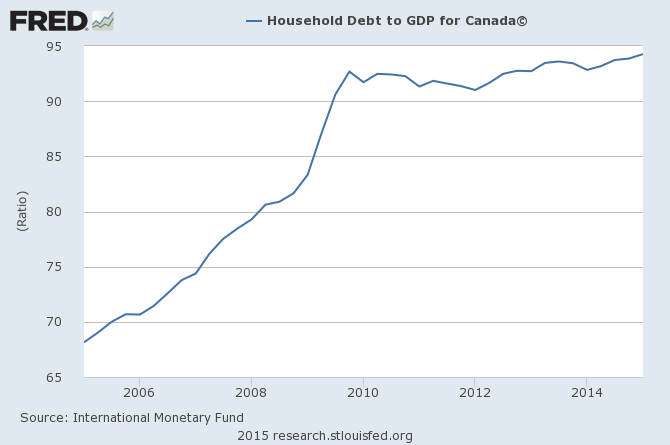 Indeed, on Friday Statistics Canada reported that leverage, as measured by household credit market debt to disposable income has been over a whopping 160% for more than 3 years, hitting a new high of 164.6% last quarter. Maintaining this middle class debt trap has been facilitated with the appointment of Stephen Poloz, the former head of a government export agency, to the helm of the Bank of Canada.

Canada is now in recession and part of the blame should go to the Harper appointed central bank governor. Recessions matter because families pay the price. Just last week an estimated 400 more people in the Harper base of Alberta lost their jobs.

At least some of this pain being felt by families is a result of the direction of the Bank of Canada. In his first policy move on July 17, 2013, Stephen Poloz started to backpedal on Mark Carney’s tightening bias. This was a strange development given that oil was still hovering near US$100 per barrel.

Foreign exchange markets were skeptical towards the Poloz appointment from day one, and his removal of tightening language only solidified their fears. This dovish switch hit the loonie which helped to promote the movement of investment dollars into the Canadian oil patch as our assets became cheaper for foreign investors. According to TSX statistics, financings doubled year-over-year in the oil patch in 2014, most of which would have been committed before or near the peak. That preceded the financial slaughter of a number of investors and families who bet on the oil patch near the top.

What should be even more concerning to free-market conservatives is the real likelihood that the loonie would have fallen to where it is now without the prodding of the central bank. But with one important difference: timing. Had market forces been left in charge, the currency would likely have remained stronger in late 2013 and early 2014 which would have helped to contain the investment euphoria hitting the oil patch. A free-flying loonie would not have reversed the downturn, but it might have been able to cool off some investment plans which have now ended in heartbreak for many.

With the subsequent collapse in the oil price, Canada is now paying for this overinvestment, spurred, in part, by the central bank's premature dovish stance. While the Bank of Canada had lots of help from other central banks around the world in promoting the oil bubble, the early dovish move in 2013 may well have tipped us over the top and into recession.

More pain may be on the way. As expected, in the wake of falling oil prices, the loonie has dropped which automatically loosens monetary conditions. That was not enough, however, for the Harper conservatives' central banker who intervened further via interest cuts, despite the plunging currency. These lower rates are now helping to roast already well-baked housing markets in Toronto and Vancouver. Moreover, these interest rate cuts have taken place despite robust underlying inflation, with the Bank of Canada's core index above the 2% target.

While the path of real estate prices is unclear, eventually housing prices are likely to capitulate under the inability of working families to afford the costs of owning a home in those markets. A financial wallop is not out of the question for home owners who succumb to Ottawa's enticements to buy, buy, and continue buying even as prices eventually top out.

So far, Harper conservative tinkering in the housing market with so-called "macroprudential" rules has failed. This is not a surprise given that no one seems to be really in charge and publicly accountable for such measures. An emerging area of macroprudential concern has been new evidence of potential money laundering taking place in Canadian real estate under the nose of the "law and order" Harper government.  If money laundering becomes a growth industry in Canadian real estate, the timing of a possible housing correction is anyone’s guess. Under such a scenario, the winners will be corrupt players from around the globe who hear that Canadian real estate is a great place to park cash. The losers will be young Canadians who will be priced out of the market.

Harper economics, instead of embracing free markets and conservative monetary policy, has evolved into a grab box of boutique tax cuts and central bank interventionism. Ironically, in terms of those tax cuts, they are ultimately being financed by the families who are the targeted beneficiaries.

Canada urgently needs to pivot back towards sound money principles and adopt policies with respect to the real estate market that puts the interests of all Canadians, including future generations, first. Most importantly, the next government in Ottawa has to stop relying on a buildup of household debt as a means to keep our economy going. There is no point in chest pounding over central government balanced budgets during a period in which financial risks are merely being moved onto family balance sheets.

Canadian insiders are starting to move back into innovation, an area that is, relatively speaking, more dependent on human capital than central bank and government policy. Our Market INK report provides a clearer picture of precisely where insiders are placing their bets right now.

Ted Dixon is the CEO of INK Research. He has been ministerial assistant to a number of Progressive Conservative cabinet ministers including the Right Honourable Kim Campbell. Most recently, he was the policy chair for the BC Liberal Party (no relation to the Federal Liberal Party of Canada) between 2011 and 2013. He has worked as a policy analyst at the Fraser Institute, and is a Chartered Financial Analyst with an MBA from the University of Chicago. His views are his own.